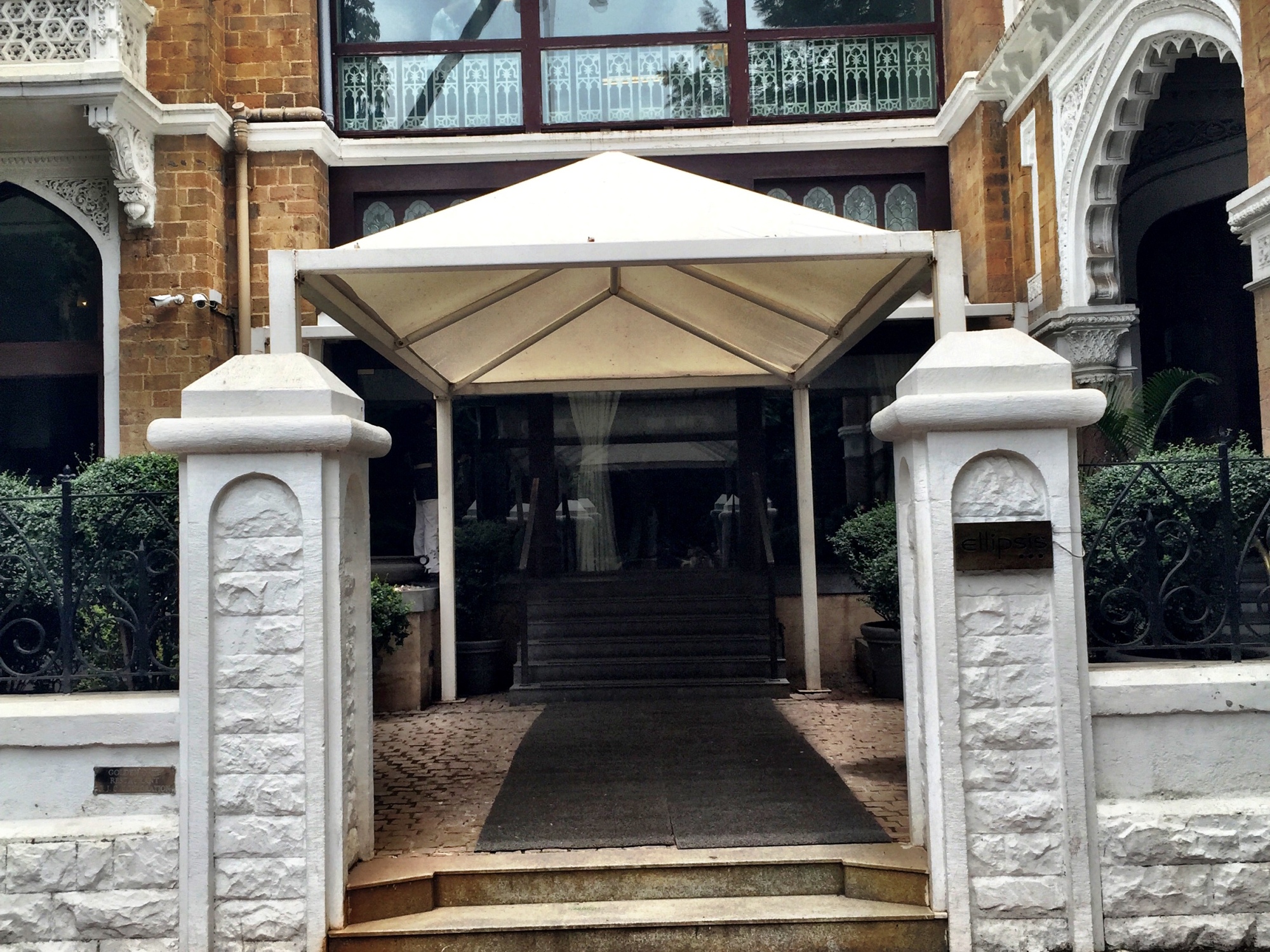 Pricey and eccentric, Ellipsis can be hard to love

Back in school, when audio cassettes were still de rigueur, I remember cajoling my folks into getting me some tapes of some of my favorite bands. In my head, those bands were highly idealized and those albums were perfect in every way.

In reality, much of the songs were worth skipping over and I only really remember 3, maybe 4 songs at a stretch.

My experience at Ellipsis was like one of those albums, promising much, but delivering very little of substance. In my head however, only the greatest hits remain as I forgot the rest of the ho-hum tracks.

The question did pop up at one point in our meandering conversations; “What does Ellipsis mean anyways?”

In common parlance, it’s nothing more than those three little dots you put as an afterthought at the end of your sentences, and sometimes smack in the middle of it when you type…like this.

However, I can’t help but think to myself how clever it is as a name since it stays true to the spirit of what Ellipsis is meant to be; a modern fine dine with a menu that constantly evolves, caught in a never-ending flux hinged on seasonal produce. As a concept, the ellipsis also denotes that there’s always something cooking in your thoughts with more to come, except in this case it’s the kitchen that keeps the thinking hat on.

To say Ellipsis is swanky would be an understatement. The best words I can use to describe Ellipsis are refined, even restrained, debauchery. You can see it in the interesting light fixtures with several crowding around in an almost tacky ornamentation where only a few would suffice. You can see it in the intricate paintings and dawdling brushstrokes that have dribbled over onto the walls.

It is an almost egregious excess that defines Ellipsis, and it is not hard to see why it is so. Ellipsis’ clientele is the swish kind of crowd that still calls Mumbai Bombay because, as Paris Hilton might say, that’s haute, and they dine out at places like Ellipsis not because they wish to savor the finer pleasures of life, but because they want to be seen doing so.

It is nothing less than ironic then to see that Ellipsis disappointed because of how down-to-earth its menu was on the day.

Ellipsis tries hard to be everything to everyone. Like a teenaged girl trying to impress her crush, Ellipsis tries to be too many things to be too many people. While the upper level gives off a cozy, warm, laid-back feel, the bar area on the lower level appears chic and sexy, doubtlessly buzzing as it draws all the creatures of the night out of their lairs and into their natural habitat.

While it all feels easy-going, the place got packed tight by the time we were leaving and getting through to the person sitting opposite would be a more difficult time than trying to find something reasonably priced on the menu. Their pricing is not for the faint of heart either. Nonetheless, we ambled over to Ellipsis hoping to find comfort food that innovated and delighted.

Instead, we were left slightly dumbstruck to see a weekend brunch menu on offer that left us a bit cold.

A quick glance at the dinner menu from last night only served to heighten our disappointment, and like a child given hand-me-downs, we tried to make the most out of our lot in life. Like said child, I don’t think any of us hid our disappointment particularly well.

Don’t get me wrong. I get why the market-driven menu is curated daily, but surely you’d want to play an ensemble of your greatest hits alongside some newer numbers. Many a dish we read of offered a playful take on the traditional, but alas, none of them were available on the day.

For a day that promised so much, I could only hold up 4 dishes as a quartet to remember, so let’s start with the high points.

Normally, I’d declare the succulent Pork Belly buns as a thing of beauty, but I’ve had some stellar pork belly in the last few weeks that put this slightly in the shade. Ergo, while the tasty-but-I’ve had better-pork belly buns look adorable, their flavors didn’t leave me wowed.

With hefty slabs of meat dotted with bright red kimchee, it makes for quite the eyeful and since the meat is shorn of fat, it’s easily devoured. The sweetness of the pork plays perfectly with the dripping piquancy of the sauce it is glazed in. However, with just three baos served to the plate, it leaves something to be desired in the value for money department. It was a theme that was to be repeated.

After quite a bit of should we, shouldn’t we (let the record show I was firmly in the former camp), we finally gave in to temptation and ordered for the Buffalo Wings. And what a glorious decision it was.

As the rest of the food lay slain and lamented for its mediocrity, this came galloping in to save the day. Sticky and with a crunchy exterior laden with sesame seeds, these wings are some of the best in the city bar none. The sweet and spicy flavours of this combine to create a wondrous combination and it was quite easily one of the best dishes on the day.

Craving for something fishy, we zeroed in on the Lobster Tacos and it was another dish that found favour with everyone. Juicy and piquant, the lobster meat was restrained in its flavor, and so a squeeze of lime was enough to enhance its flavours. Great care was taken not to use too much spice or to overpower the Lobster, for it was the star of the show. I can see why the fish tacos get such rave reviews, and it is fully deserved if this is anything to go by, price notwithstanding.

As we faced a series of misses and our hearts grew collectively despondent with every failed relationship, I was inclined not to give the desserts a go. It was Nika and Ruhi that insisted we get something, anything, to put a sweet end to things. And the French Toast with Dulce Leche was a fine end to an almost pointless exercise, a bit like finding a fantastic shop after you’re done with all your shopping (note: ladies, this analogy doesn’t apply to you. You may continue treating shopping as your national sport).

The combination of the candied sweetness of the dulce de leche ice cream and the aromatic loveliness of the french bread was eye-opening. This was as far removed from my ideal dessert as possible, and yet it provided enough of a punch to leave me mildly satisfied at the end of a disappointing meal.

However, like a band that wanted to abandon its established sound and experimenting with something new, there were many, many misses on Ellipsis’ part.

Take for instance the Truffle and Asparagus dimsums and the Chicken Sui Mai. While they both boasted delicate flavours and textures, they were not elevated to a fine art as they should perhaps have been at this price point. Beyond a point, food has a diminishing marginal value and dishes such as this are the perfect example of this.

The falafel too was a gloppy mishmash of ingredients that wasn’t rich on flavour, and even the lover of all things Lebanese, Assad Dadan, couldn’t get himself to dive headfirst into it. Mr. AD was in form on the day, proclaiming the Lamb tacos to be akin to Nalli Nihari. The meat was tender, if a bit stringy, and the flavours were too familiar and Indian, leaving many a bit dumbstruck as to how this made its way to a modern American menu.

While the Truffle Fries  me to the table richly redolent with the aroma of truffle oil and cheese, it stopped some way short of being an incredible experience, which at Rs. 950 a pop it bloody well should be. I can see why some would rave over it, but it’s hard to justify it once the initial dazzle dazzle fades away.

The shrimp tacos too were in a strange kind of purgatory. Neither bad nor great, it came and passed a bit under the radar, which is strange since the shrimp slayer, aka Yatin Gadgil, was in attendance. That he didn’t take a shine to it should tell you all you need to know.

The pancake with sea salt and pretzels too didn’t get much love. It’s pillowy nature and the fact it was fatter than some of my 10th grade text books worked against it. To draw a direct comparison, the French Toast was like the hot girl at college that everyone wanted a piece of, while the pancake was like one of her friends that people glossed over gladly. Harsh, but true.

My lamb burger came stacked, with a sunny side egg, well-endowed patty, some gherkin, iceberg lettuce, tomatoes and a side of…potato chips. While the burger was filling and quite good, I can safely say that it falls short of some of the city’s finest, and perhaps more than anything I can’t wrap my head around the side of potato chips. At almost Rs. 1000 for the burger, is it so hard to serve some hand-cut fries with a dip?

Ellipsis is meant to be multi-faceted, which makes the fact that the one-dimensional menu we ordered from even more damning. Some of the dishes showcased the ease with which the kitchen highlighted the natural flavours of a given dish, but what was served up was more comfort fare than the technical accomplishments they should have been, especially at Rs. 2250 a head.

For those of you with more money than sense, walk in anytime just to be seen at the races. If you’re a more savvy diner though, you’d want to call ahead and figure out what’s on offer. As the name suggests, there’s more to come, but on the day we were left wanting a whole lot more. C’est La Vie.