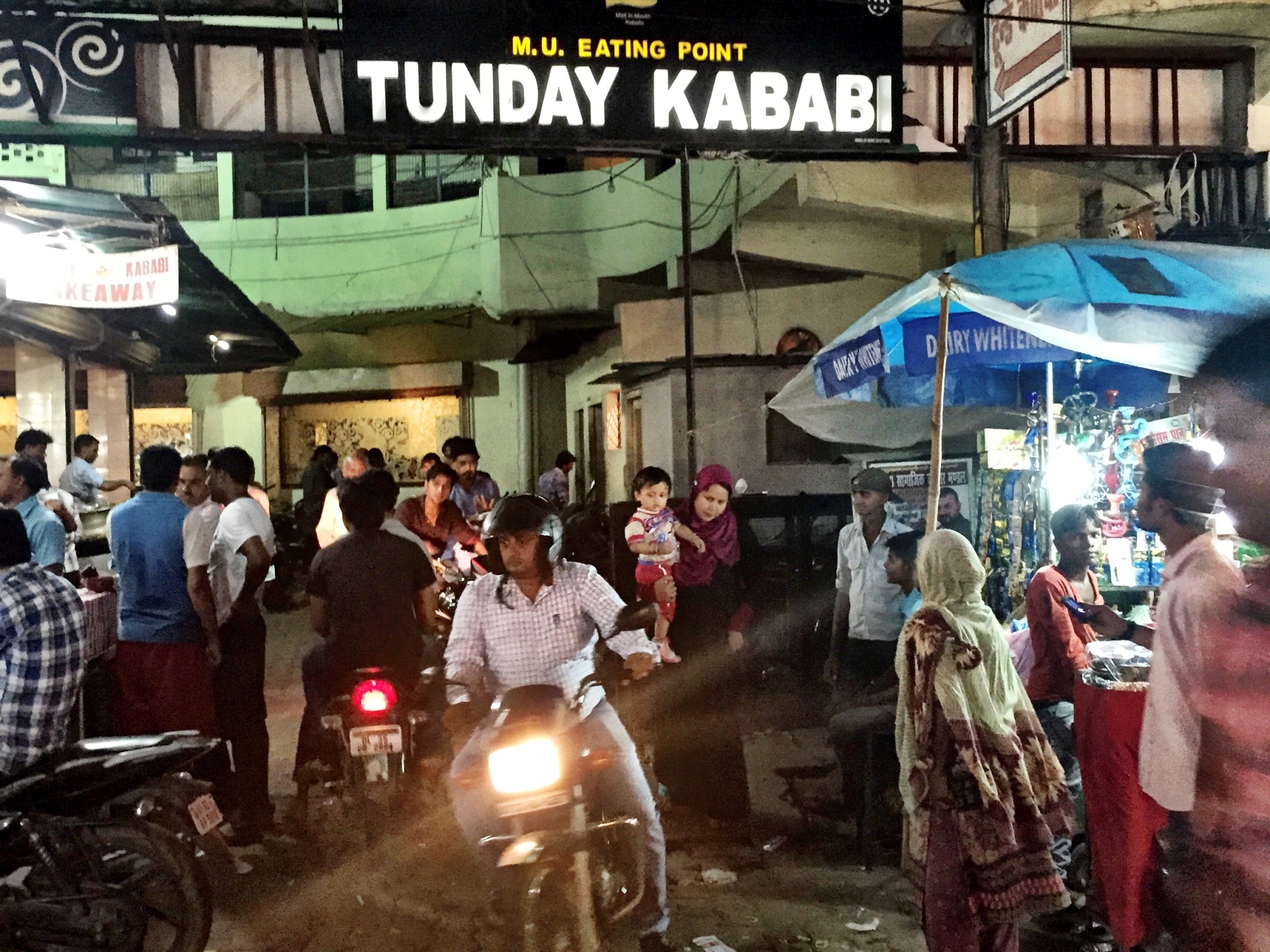 The Titanic’s sinking, the founding of Mercedes and the outbreak of World War I; these are just a few things that hadn’t happened when Tunday Kababi was first born more than a century and some years ago. The place is inexorably interwoven with the fabric of Lucknow’s history, and it has grown from a blink and you miss it 12×18 ft kabab-paratha corner in a narrow bylane of old Lucknow’s crowded Gol Darwaza street to the jigsaw piece without which any food trail of lucknow is incomplete.

And so, a visit to it was thus unavoidable, no matter how short the visit.
I got down from the rickshaw, saw the mela like melee playing out all around me and thought to myself, “this is the belly of the beast, the eye of the storm, the kradle of the kabab”.

Well, I didn’t think of that last one, and the ‘k’ konnotation was more forced than the nomenclature used for certain saas-bahu serials, but 2 out of 3 isn’t bad, all things considered. Up and down down the country, there are hallowed eateries with carefully constructed legends built all around it. For Lucknow, is that King Kong in the room. It’s the one name that consistently pops up in conversations about Lucknowi cuisine, drawing in people from all walks of life like moths to a flame.

From its innards crawled out people of varied sizes and races, but what they had in common was that they all displayed signs of that state of being known as The Waddle, that post-meal gait that only comes about after a satisfying meal. The place is not much to write home about.In fact, my thoughts about the way it all looks could be penned on the back of a postcard.
It’d go something like, “This is the kind of place that fell out of the ugly tree and smacked every branch face first on the way down.”

The place is a bland victory for functionality over aesthetics with its exposed chairs, austere tables, bulbs meant to shine a light and not act as an adornment. But Tunday Kababi has no need to wow with its looks. Like most might say, it’s what’s on the inside that counts, as the gathering of diners gorging on the fare they dish out would attest.

To begin proceedings, I called for some pieces of the Galawati Kabab, for one cannot dine in the court of the king and refuse a meeting with royalty itself. This fine, melt-in-the-mouth patty made using myriad spices and condiments (all of them local to Lucknow) can be had made with either finely-minced mutton or beef and is said to pair well with the light and airy Roomali Roti, but I opted for the Sheermal Roti instead.
The shallow-fried, slow-cooked kababs arrived with no fanfare accompanied by the flatbread, and the mild, understated sweetness of the roti (which was a touch too red for my liking) grew on me with time enough for me to ponder making a stand-alone order for it. But it is not the roti for which I made a beeline here.

The kababs, melt-in-your-mouth tender, succulent and excellent as they were, didn’t wow me entirely as they had when I had enjoyed it at the Chowk outpost of Tunday Kababi. They were still delectable and fantastic, but something was missing that made me ask a roving TV crew to buzz off the first time I dug into it. It was mesmeric that time, but like revisiting an old flame, I wondered a little what the fuss was all about.

Much more enjoyable for me was the Mutton Biryani with its mild flavours and chunky pieces of meat that blew the stupidly formulaic and over-spiced biryanis that have proliferated across Mumbai clean out of the water. Absent from it was the layer of oily, over-spiced gravy that resides in most Mumbai biryanis and what this was was a mildly fragrant rice cooked with just enough meat to let its flavour percolate through the rice without overpowering the flavour of the spice. The flavors were a medley of happy mediums without one of them overpowering the other. It was a win for a wide diaspora of mild flavors.

The server claimed that their Mutton Korma was their must-have item, and so at his behest I called for a half plate of this with some Mughlai Paratha, but this dish was an absolute damp squib. With pieces of mutton swimming in a sea of oil and ground plus unground spices, this dish was as special as discovering pieces of coal in your Christmas sock. The flaky, fluffy and crunchy paratha almost made this tolerable, but it was a losing battle. The paratha constantly took me to a happy place and the korma dragged me kick and screaming back to Sadness Central. It was a match made in hell for me.

I had to take off the rose-tinted glasses for this review, else everything seems rosy and lovely. But even so, in the race to complete a food trail through Lucknow, I’d say Tunday Kababi is most definitely a place to take a pit stop and then some more as you dig into a plateful of culinary history. Bon appetit.