When someone says one thing and does something else altogether, I often end up losing respect for the person entirely. After all, all relationships are based on entirely on trust. Take that away and what you are left with is the empty husk of a premise, a hollow promise unfulfilled.

That is why for me, disappointment has a name, and it answers to the name of Celini. 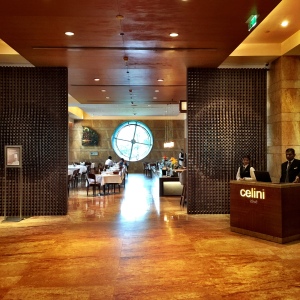 When I saw the Restaurant Week India menus online, only a few grabbed me by the eyeballs and had my attention, and Celini was one of them.

Red Snapper? Alrighty boy, you’ve got me hook, line and sinker. Now reel me in big boy and let’s call it a date.

However, the ground reality on the day was much different. the menu shown online by Celini and what was actually served to us at the restaurant was drastically different, I would go so far as to say watered down and unappetising almost. Suffice to say almost all the big hitters were replaced by damp squibs and I felt a bit like a guy that had gambled on online dating after seeing a pretty face in a profile picture, only for the reality to be nothing like it.

Disappointed and disheartened, the four of us decided to soldier on only because we were already there and were too far gone to return (in a manner of speaking).

“55 East?” whispered the man who had boldly ventured forth where he rarely ever goes. Perhaps we should have listened to him, but hindsight is 20-20.

We began our meal with some fresh Ciabatta with a tomato and aubergine salsa, and I appreciated the freshness of the bread along with the rustic combination of tomato and aubergine that was not too finely chopped, leading to a lovely mingling of textures and flavours. I however couldn’t help compare it to Botticino’s bread basket and this offering was Lilliputian compared to Botticino’s Gulliver. That we quietly worked out way through it without much fanfare and ado says it all.

We went with 2 portions of the Chicken Soup (with onion, garlic and sage) and the Spicy seafood soup, and neither of them impressed me in the slightest. The Chicken soup made me feel it would be more exciting to watch paint dry and the Spicy Seafood soup was another broken promise since it lacked any kind of spiciness or serious punch. I get that this is a refined eatery and the flavours will be more evolved and sophisticated, but the flavours in this soup seemed to have slunk off quietly to go on vacation in Cancun.

If I were a Roman emperor and this were a gladiatorial battle in the amphitheater, the Braised Duck with Cucumber would have got a certain thumbs down from me. The mellow gaminess of the duck was utterly overpowered by the goddamned cucumbers (I hate this goddamn vegetable with a passion, it makes every dish about itself, it’s so bloody overpowering) and the dish had this utterly bitter flavour about it that was actually portentous since it foreshadowed the sense of lingering bitterness I have about this meal till date. On some notes I can wake up and feel the bitterness still looming large on my palate.

The Smoked Chicken Pizza was one of the few highlights of our meal, and I had enjoyed a chicken pizza after a long, long time. The wafer thin crust had its edges speckled black where it had been burnt (as were we, but you can’t see those emotional scars) and it was puffed in places too, all of it housing a saucy tanginess that was thoroughly enjoyable. Paired with the sweet mellowness of the cheese (Yatin swore he got a hint of Brie in there, I’m not entirely sure about that), ever bit was a mouthful of clean, fresh flavors that transported us to sunny Italy.

The Smoked Salmon with Sour Cream and some Mushroom Caviar was another hit for me, with the rich, complex flavours of the salmon offset by the thick sour cream’s earthiness and the Mushroom Caviar added a dash of glamour to it all, like a pearl necklace around a leggy supermodel’s neck. This was perhaps one of only two dishes on the day that truly displayed Celini as it should be, but it’s not something you can’t get elsewhere at a significantly lower price point.

In between courses, we cleansed our palate with some Lemon Sorbet that was delightfully, almost overpoweringly citrusy at first, but a few bites into it we realized we were biting off more than we could chew. Hugely dominating as flavours go, I’m sure that if we were to go through an entire bowl of this, it would cleanse our palate for a few days at least, such was its domineering nature.

The Red snapper with taggiasco sauce and sauteed spinach was another good dish with hearty, tangy flavours that pleased the palate. The snapper itself was done to perfection, but it’s not something you’ll find me making a beeline for to Celini since similar dishes can be had for far less in eateries more within our reach. The realization of this simple fact meant I could not view this dish through rose tinted glasses.

The Spaghetti with Shrimp was a blind date gone wrong. Horribly wrong. Every little detail we imagined about this dish was just way off, and each mouthful off it was an excruciating amount of ‘why god why’. The dish was just too unpleasant to like, a mix of bitterness and savory flavours that didn’t cull any favor with me at all. One forkful of it was enough to tell me all I needed to know; steer clear of this dish like it’s the plague itself.

On request, the mixed vegetable risotto was converted into a gorgonzola risotto with caramelized onions, and this savory, well balanced risotto was nice without wowing us. Only the sight of browned onions dotted the otherwise desolate landscape of the risotto, and its undulating singularity stopped it from being something truly great. It was simply a tale of what could have been.
This got us roundly to the singularly incredible part of the meal that we should have perhaps began proceedings with.

Celini’s Tiramisu is, without a shadow of a doubt in my mind, one of the best in the city. Boasting the flavour of creamy mascarpone and with a delicate dusting of rich cocoa espresso powder blanketing it all, each bite of this was like a party in my mouth. Light and airy, this was one hell of a delightful dessert to have, light, ever so slightly punchy and immensely comforting to have. If you were to come here and not order this to round things off, you really should be questioning your life decisions.

I’m not a huge fan of creme brûlée , but Celini’s creamy, crunchy, custardy take on this was a revelation. The way I roll my R’s makes my pronunciation of this dish a little less than perfect, but the same cannot be said of the dish itself. Persistent tap tap tapping on the sugary coating gave way to crisp slivers of sugar that made for perfect munching along with the creamy, nutty, custardy innards tinged with the flavour of hazelnut. It was like cracking open a tiny piñata and being rewarded with epic goodness that changed the way I saw creme brûlée and the possibilities that lay within each bowl of it.

However, just as one swallow does not a summer make, so too does one incredible course not a great meal make. Celini had already rubbed us the wrong way with their little stunt of changing the menu without serving fair notice to its diners (whatever happened to caveat emptor?), and if I had to pay full price for this meal, I would have certainly have walked out dejected more than delighted. And dejected I was at the end of it all. So what if those desserts tried to end things on a sweet note? It couldn’t stifle the lingering bitterness I felt over the possibility of what could have been, snatched so cruelly away from me.

P.s: They even replaced the apricot custard tart with a fruit platter. A bloody fruit platter. You get that outside a railway station for tuppence. Now excuse me while I go make myself a fruit platter of my own and feel like a 5 star chef.