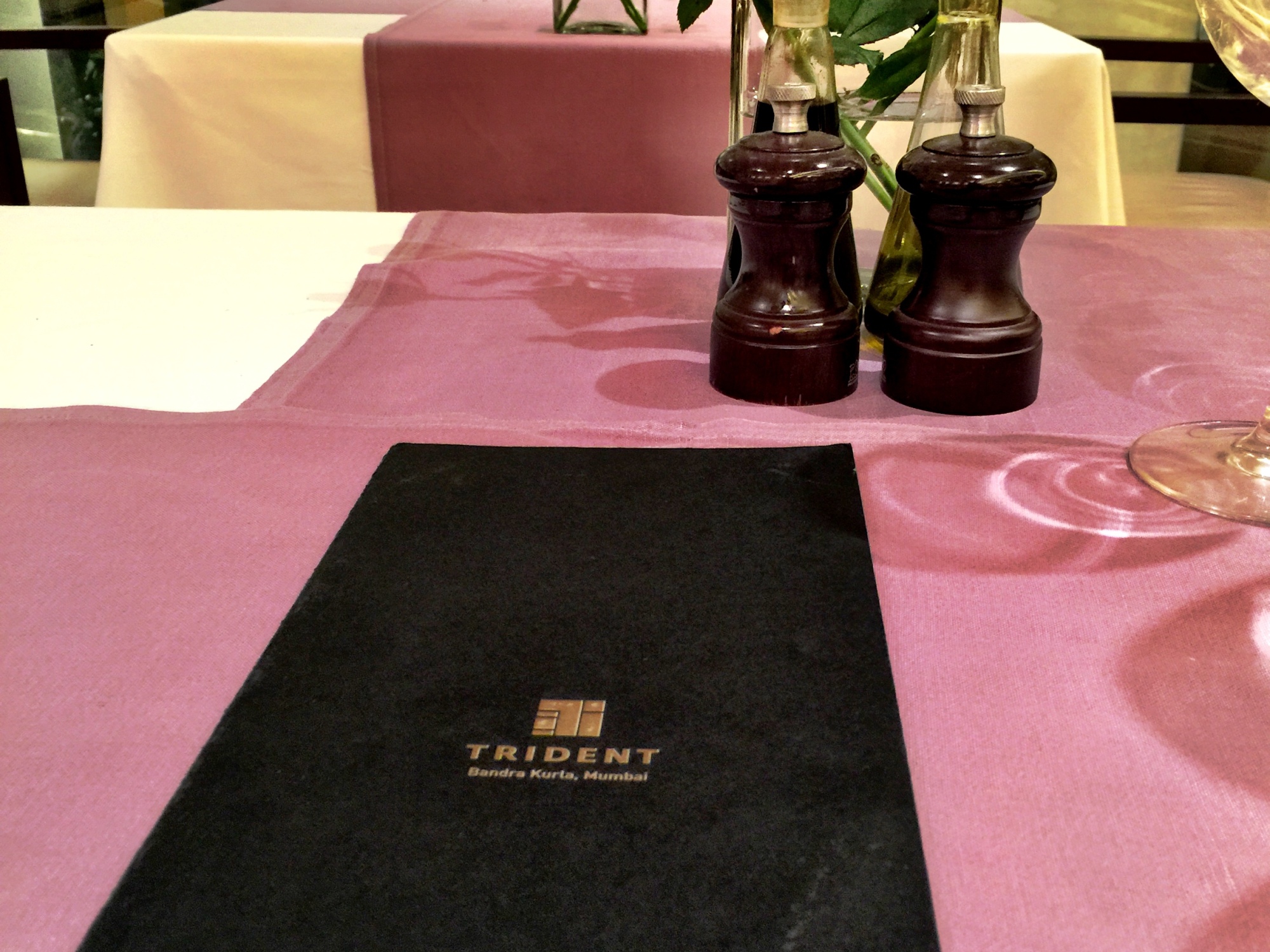 Try as I might, it just wasn’t coming out. I struggled, forced it and huffed and puffed, but to no avail. It was like running into the proverbial brick wall, and it was one even the big bad wolf couldn’t blow down no matter how hard he tried.

Yup, I was bottled up bad with a case of writer’s block. It’s a terribly constipating feeling to have all the creativity sucked out of you, with so much to say but no way to express it.

It took Steven Tyler to bitchslap it out of me.

As I fired up the car and the Bluetooth connected to the in car entertainment system, Stevie boy hollered out at me “Hey, j-j-j-jaded” with a stammer I never knew he had. It was like the floodgates had opened and a torrent of thoughts came gushing out of my mind all at once. Yup, one pill of Tyler-nol did it for me.

And how is that so, you ask?

I’m glad you did. Or didn’t. Whatever. Stay put and listen now. You asked for it. Or not.

See, as someone that eats out more than your average Joe or Jane (or Jignesh and Jigisha, if you must add some desi tadka), you end up getting jaded after some time, and it becomes very difficult for a new eatery to break through that thick hide and leave an impression on you. I can only think of 3 restaurants in the last year that have done that.

More to the point, I have to admit that I am very averse to dining at 5 star establishments simply because it’s very hard to leave a lasting VFM impression at their stratospheric price points. What’s more, there’s always elevated expectations by way of quality of food, service and ambience, the holy trifecta of dining out. So it’s no surprise to see that the task of bring a crowdpleaser, which is difficult as it is, becomes near Herculean in proportions.

However, it’s easy enough to relax that rule during Restaurant Week India, when the city’s A-grade restaurants send out their B-team to try and please C’s like me. And so it came to be that we went Botticino as one of our choices of…well, choice.

Botticino, it has to be said, is a great book with a particularly unexciting cover. The clean, modern bright look is a bit too clean cut for my liking, and it’s all a bit too utilitarian. Overlooking the driveway and floating in a sense over 022 (the all day dining located one level below), Botticino is like the topper from my school; perfectly sensible with its airiness, simplicity and high ceilings, but not much to go on by way of chutzpah and glamour.

But the devil is in the details;the oak like colours of the table, the pastel shades of the furnishings, the use of botticino Italian marble all lend it an air of grown up elegance that the school kid in me doesn’t fully appreciate. And while the under-floor lighting emphasises the floatiness of it all, it is the food that truly helps you float off into a lighter, better place, like human balloons wafting off towards the food horizon.

Shortly after plonking our derrieres into position, the customary bread basket was brought out to us and of these I took a particular shine to the Onion Bread, which I was quick to christen as an Italian Khakra, much to the horror of one of the staff. The result of onion and Lavash’s labour of love, this was a snack I could munch on ad nauseum given the chance. And that I did, because there’s no such thing as too much of a good thing, now is there?

The clean, fresh flavours was to be a thread that strung its way throughout the meal. Take my Pea Soup and Bacon Ice Cream. Intrigued by this, the hot and cold combination of flavours had a lovely interplay the played out like a lilting melody on my palate. In between spoonfuls of warm pea soup and scoops of ice cream studded with bits of bacon, I marvelled at how mesmeric this combination was and the artistry that underpinned the simplicity of it all.

Ruhi’s Fried Squid Ring salad caught my eye only for the tiny squid rings that had been crumbed and crisped to perfection. Each mouthful of the outer layer gave way to perfectly cooked squid that was tender, pliable and devoid of even the slightest hint of chewiness that i the albatross around the proverbial neck of squid. For a change of pace and burst of juiciness, I forked the iceberg lettuce and spooned some cherry tomatoes. Mmm, fresh, what a wonderful F word you are.

Keeping in mind the kind of people we are, I went with lasagna for my mains (since it was made with lamb and I am an innocent little one) and Ruhi opted for the Seafood Conchiglie Marinara (since she’s a bit fishy as people go). I took my time over the lasagna since it had been quite some time since I ordered some, and its rich, hearty flavours reminded me why it was one of my stoic favorites at one point in time. The savoury creaminess of it all melded together perfectly into one indulgent dish that’s great to tuck into every now and again since it’s rich and far, far removed from being a specimen of healthy food. But then, I’m far, far removed from being a specimen of healthiness myself, so I guess it was a match made in heaven.

The Seafood Conchiglie Marinara came to us swimming in a sea of tomato sauce, and like the dishes before it, it wasn’t skimpy in the slightest. All that was missing was a kindly Italian grandma standing around and chiding us for not eating enough, for this was a dish straight out of a homely Italian abode. Laden with cherry tomatoes, assorted seafood and more seashell shaped conchiglie pasta than you’d know what to do with, it was the fishy counterpart to my lasagna with its fishy, humble, rustic flavours that pleased the soul. My only issue with it is was that the seafood was too little for my liking, or perhaps it just was that Ruhi went fishing and there weren’t enough fish left for me to pull out of the Red Sea.

The only downside of the meal for me came by way of the desserts, with the Passionfruit Pannacotta being too dense and creamy for my liking, while the Belgian Chocolate Pave filled with walnuts was just too damn decadent to finish off at the end of a wholesome and filling meal. It was perhaps a bit dry too, and the dash of raspberry coulis on the side just had too large a mountain to climb and while it tried gamely to add a touch of liveliness to proceedings, it was too little too late. In the end, I turned to the delightful coffee ice cream to moisten the palate and end things on a bittersweet that was 2 parts delightful and 1 part earthy.

A special mention goes out to the Guava Chilli sorbet served in between courses that would have been good enough to have as a dessert by itself. Sweeter still was the fantastic service meted out by Harish (who was so obsequious when he greeted us, I was certain he was star struck), Arjun (who was always close at hand while leaving us alone, an uncanny skill to have), Jyoti (who very sweetly stuffed us silly with bread like a bakra being fattened), Chef Santosh (who came by to our table and every table to ensure everyone was having a good time) and Alisha (who came over to double check on things and looked genuinely happy to see us happy. It is service such as theirs that can put the proverbial cherry on top of a wonderful evening.

We were left to waddle out stuffed silly like a Turkey during Thanksgiving, and that’s not entirely a bad thing. Very often, you forget the finer details of a place; the melody of the music floating through the air, the staff that greets you at the lobby when you betray the slightest hint of confusion, or anything else. But what you don’t forget is how it makes you feel, and Botticino fed my ego as much as it fed my belly and for that alone I’m going to tot it up as a win in my books.

With a personality that’s a bit like Krugman crossed with the Dalai Lama, it’s no surprise that Botticino warmed the cockles of my heart and drew me in as easily as it did. I’ll certainly be back for a slice of the good life, my growing resemblance to the Pillsbury doughboy be damned.